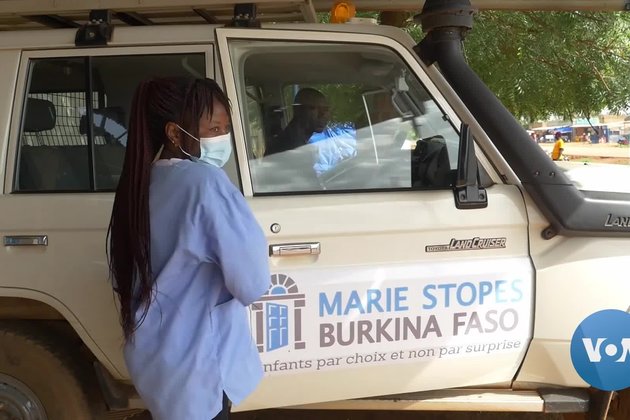 KAYA, BURKINA FASO - The COVID-19 pandemic has led to cuts in foreign aid from donor nations such as Britain - which cut its aid budget by $5.5 billion - Australia, Japan and Saudi Arabia. The funding loss is being felt in Burkina Faso, where it could shut down a group that helps thousands of survivors of gender-based violence and rape.

The largest international nonprofits say the shock waves of the cuts will be felt by people across Africa in all kinds of situations and will result in deaths.

"For countries like the [United Kingdom] and others to be cutting their aid budgets in a global pandemic is extremely shortsighted, and we know it will put the fight back against poverty by many decades," said Sam Nadel, Oxfam government relations chief. "So, the U.N. secretary general, for example, has called these cuts a death sentence, and it really is that stark for many people."

FILE - A woman carrying a baby arrives at the clinic of the NGO Marie Stopes in Ouagadougou, Burkina Faso, Feb. 16, 2018.

The cuts will impact large numbers of women, according to the head of Marie Stopes-Burkina Faso, Dr. Toumbi Sissoko. The group has been able to assist more than 500,000 people over two years, she said.

"Alice," whose name has been changed to protect her identity, received help from Marie Stopes after she fled her village in northern Burkina Faso, when gunmen attacked. She trekked through the bush for three days, seeking refuge, but then was seized by a group of terrorists.

She says they told her to put her daughter down, before one of them hit her with the back of his gun, knocking her to the ground. Six of them raped her, then discussed whether they should kill her, but, she says, they concluded it was useless to kill a woman. They got on their motorbikes and left.

When she reached the relative safety of Kaya the next day, she was directed to Marie Stopes-Burkina Faso.

Alice says a woman from Marie Stopes immediately gave her morning-after pills and advice. She was still traumatized and could neither eat nor breastfeed her daughter. She says that the woman at Marie Stopes encouraged her to eat and told her that her life was still worth living.

Flora Guibere, who works for Marie Stopes, fears that with the foreign aid cuts, beneficiaries will be left on their own, and many of her organization's workers will be out of a job.

For women like Alice who fall victim to gang rape, it will mean they may no longer receive emergency birth control or support.