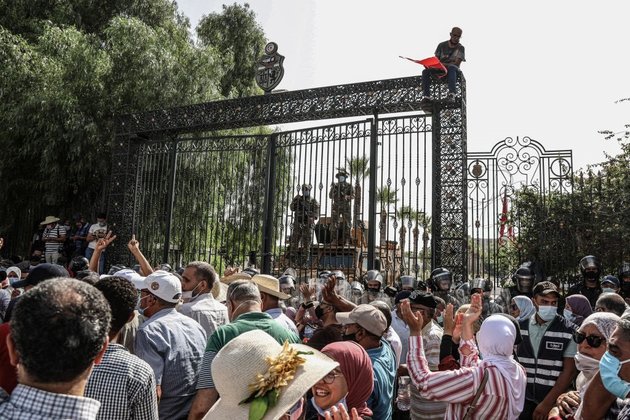 The US Secretary of State has expressed concern about the political crisis in Tunisia after President Kais Saied suspended the parliament and dismissed the government in a move the country's main political parties called a "coup".

Antony Blinken said on Thursday that he was concerned about the possibility of Tunisia deviating from its democratic path, urging action including the restoration of parliament after he spoke to Saied on Monday.

The top US envoy said that Saied gave a "lengthy explanation" of why he took the unprecedented step, adding that the Tunisian president promised him he was committed to democracy.

"The intentions he expressed to me were to return Tunisia to that democratic path and to act in a way that was consistent with the constitution," Blinken told Al Jazeera during a visit to Kuwait.

"But of course we have to look at the actions that the president takes, that Tunisia takes," he said.

Blinken expressed hope that Tunisia will "return to the democratic path".

"So our strong hope and expectation is that Tunisia will return to that democratic path, act consistent with the constitution, unfreeze the parliament, have a government in place to do the work of the people, to be responsive to their needs."

The State Department had previously said only that Blinken encouraged Saied to "adhere to the principles of democracy and human rights" without explicitly calling for the return of parliament.

Saied, a political newcomer when he won a landslide presidential election victory in 2019, intervened after mass protests over the government's handling of the coronavirus pandemic.

He also dismissed top officials and the head of the national television channel and declared what he calls a crackdown on corruption.

The power grab has been welcomed by many Tunisians struggling to make ends meet and fed up by the mismanagement of the Covid-19 pandemic.

The young democracy had often been cited as the sole success story of the Arab Spring.

But, 10 years on, many say they have seen little improvement in living standards, and have grown infuriated by protracted political deadlock with infighting among the elite.

Blinken also said the rights of journalists need to be upheld by Tunisia's government following the removal of the head of the national television station on Wednesday, and the decision to storm Al Jazeera's bureau in the capital Tunis.

"My comment is that we stand absolutely for freedom of the press and for the ability of journalists to do their jobs," Blinken told Al Jazeera.

"And we look to the government of Tunisia to uphold and respect the rights of journalists, and that's one of the things we expect of them," he added.

His comments came a day after President Saied replaced the head of the national television station Mohamed al-Dahach after officials from the journalists' syndicate and human rights league were barred from entering the TV station.

The head of the channel Dahach said he was acting on instructions from the army which a military spokesperson denied on-air. Eventually, both guests were allowed in.

Bassam Trifi, deputy head of the Tunisian Human Rights League, was one of the guests barred from entering the channel.

He told Al Jazeera that they would "deal with this exceptional situation with caution".

"Yesterday we issued a statement that we won't accept any infringement on our liberties, the ones we gained in 2011," Trifi said.

"Whatever the explanation of what happened at the state TV is, civil society is aware of any attempts to affect our freedoms, the liberties acquired through the struggle of Tunisian people. We are watching where all of this is going carefully," he added.

Ravi Prasad, the head of global outreach for the International Press Institute said Tunisians have had very limited access to information since the recent political upheaval.

"After the revolution, what we witnessed was that media in Tunisia had great freedom," Prasad told Al Jazeera.

"But now this hard-fought freedom the media got is at risk because of the changes that are taking place.

"We do need independent media in Tunisia at this moment, and we need the support of the international community, and pressure on the government, to stop harassing the media, allow media organisations like Al Jazeera ... to function and get the news to the people," he added.

President Saied has said the parliament would be suspended for 30 days, though he told reporters the 30-day period can be extended if needed "until the situation settles down".

Saied has accused 460 businessmen of embezzlement as he declared a crackdown on corruption. In his comments late on Wednesday, the president singled out for criticism "those who plunder public money".

He said he would assume executive authority with the assistance of a new prime minister. It is the biggest challenge yet to a 2014 constitution that split powers between the president, prime minister and parliament.

He also suspended the immunity of members of parliament, insisting his actions were in line with the constitution.

His move has been criticised by the main political parties, including the Islamist Ennahda.