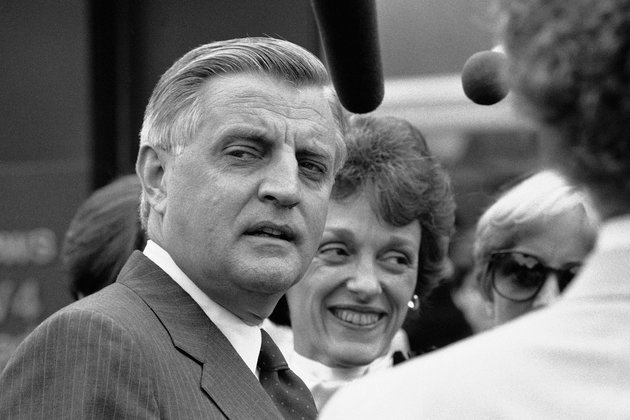 MINNEAPOLIS - Walter Mondale, who died Monday in his home state of Minnesota at 93, was always generous with his time, careful in his thought, occasionally humorous in his storytelling style, and sincere in his belief in fighting the "good fight."

During one of several exclusive VOA interviews he politely agreed to, Mondale fondly looked back on a long career in politics in which he characterized himself as "an old liberal."

"I did what I wanted to do," the man nicknamed "Fritz" explained to me in 2016. "I did it the way I wanted to do it. I don't feel any regrets about pulling any punches."

But he also realized it was the political punches he took as the Democratic nominee for president in 1984, facing off against the older Ronald Reagan in debates that shaped that campaign, that many remembered most.

"I will not make age an issue of this campaign," said Reagan during a presidential debate in 1984, who at age 73 was the oldest person to run for president to that time. "I'm not going to exploit, for political purposes, my opponent's youth and inexperience," he continued in response to a question from The Baltimore Sun's Henry Trewhitt.

The audience, and Mondale himself, erupted in laughter in an exchange now immortalized in television history and replayed each election cycle.

"I think he landed a blow there that was pretty effective," Mondale confessed to me later. "Between my laughter, there were a few tears coming down there."

While Mondale lost the election in a landslide, he said he succeeded in his "good fight" advocating for civil rights in the 1960s and 1970s.

He was appointed Minnesota's attorney general in 1960. When the state's U.S. senator, Hubert Humphrey, was tapped as President Lyndon Johnson's vice president, Mondale was appointed to replace Humphrey in 1964.

In the Senate, Mondale voted for the landmark 1965 Voting Rights Act and was one of the sponsors of the federal Fair Housing Act, which prevented housing discrimination, among other civil rights legislation.

He served there until 1976, when former Georgia Governor Jimmy Carter chose him as a running mate on the Democratic ticket for the White House.

Before Mondale committed to joining Carter, he wanted assurances his role would be different from vice presidents before him, something he learned watching his mentor Humphrey serve in a marginalized capacity.

"The idea was to bring the vice president into the White House," Mondale explained. "As we worked it out, as an adviser and troubleshooter for the president, as a spokesman for the president on (Capitol) Hill and around the country, and at diplomatic missions, and a friend and private counselor as needed."

Carter and Mondale defeated Republican President Gerald Ford and Senator Bob Dole, his running mate, in the 1976 election. Mondale assumed the vice presidency in 1977 and had a key role working with Carter to normalize relations with China, return the Panama Canal to Panama, negotiate arms treaties with the Soviet Union, and secure the Camp David Peace Accords between Egypt and Israel, among other accomplishments.

He was also alongside Carter during the low points, including an economic downturn and the Iran hostage crisis. The loss of American lives in a failed military operation to rescue the hostages was something that troubled Mondale more than 30 years later.

"We lost eight lives," he told me before a long pause. "It was the saddest ... I still have a hard time talking about it."

Despite the failed military operation, the U.S. hostages in Iran eventually safely returned home, and Mondale expressed confidence he and Carter overall made the right decisions.

"We didn't have a war. We told the truth. Obeyed the law. We set a decent standard of personal behavior. We put the nation on the side of human rights. We tried to use the force of the nation to bring about peace to resolve differences."

Despite serving one term ending in 1981, Mondale transformed the vice presidency, setting a precedent for every future officeholder.

"When President Obama asked me to consider being his vice president, Fritz was my first call and trusted guide," President Joe Biden noted in his official remarks upon Mondale's death. "He not only took my call, he wrote me a memo. It was Walter Mondale who defined the vice presidency as a full partnership and helped provide a model for my service."

Mondale also provided a model for Biden's own run for the presidency when in 1984, he asked New York Congresswoman Geraldine Ferraro to be his vice president, the first woman to join a presidential ticket. Biden's running mate, Kamala Harris, made history in 2020 as the first woman, first African American and first South Asian vice president.

After serving as President Bill Clinton's ambassador to Japan in the 1990s and an unsuccessful run to return to the U.S. Senate in 2002, Mondale settled into a role as an elder statesman of the Democratic Party. He closely watched national and local elections and supported Somali refugee Ilhan Omar's candidacy for the Minnesota legislature, and eventually the U.S. Congress.

He also entered the post-presidential record books alongside Carter.

"Carter and I have survived beyond office longer than any former presidential-vice presidential team in American history," Mondale told the assembled crowd at the rededication of the Jimmy Carter Presidential Library and Museum in 2009. "Not only that ... we passed up our competitors Adams and Jefferson two years ago. And I'm not being critical of them. They were good, too!"

Mondale documented his life and career in the 2010 memoir "The Good Fight." In our exclusive, one-on-one interviews during the last decade of his life, Mondale shared his hopes for how history will record his legacy.

"What is the good fight you want them to remember you for?" I pointedly asked him near the end of our interview in 2014.

Mondale's "good fight" for civil rights and justice continues in Minnesota beyond his death, which came a day before Minneapolis police officer Derek Chauvin was convicted on three counts in the death of George Floyd.