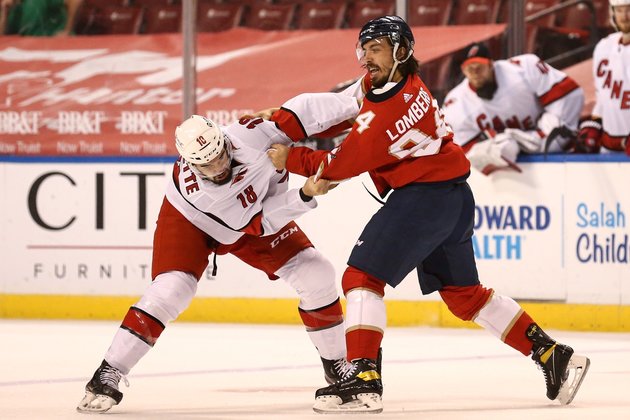 Alex Nedeljkovic made 32 saves, and Sebastian Aho had two goals as the Carolina Hurricanes beat the host Florida Panthers for the sixth straight time, prevailing 4-2 on Thursday night in Sunrise, Fla.

In the closing minutes, Nedeljkovic made a brilliant stop on Jonathan Huberdeau, who had an openright side of the net.

Aho then scored an empty-net goal with 16 seconds left to clinch the victory.

After trailing 1-0, Carolina got three straight goals from Jordan Martinook, Nino Niederreiter and Aho. Martin Necas added two assists in the period and three for the game.

Aleksander Barkov scored twice for the Panthers, and goalie Sergei Bobrovsky made 25 saves.

There were five power-play opportunities in a physical first period -- three for Florida -- but the only score came at even strength.

With 13:38 elapsed, Barkov lifted a shot over Nedeljkovic, who had fallen after blocking two straight shots. Patrick Hornqvist, who tried to jam in the second rebound, got the primary assist.

The Hurricanes tied the score just 14 seconds into the second period. Jordan Staal won a board battle against Florida's Radko Gudas behind the Panthers' net. Staal then flipped a centering pass to Martinook, who scored on the open left side of the net.

Carolina took a 2-1 lead with 11:09 expired in the second. Following a slashing penalty against Florida's Ryan Lomberg, Brett Pesce -- who drew the penalty -- fired on net. Niederreiter then cleaned up the rebound for the goal.

The Hurricanes then stretched their lead to 3-1 on Aho's short-handed goal. After a turnover by Florida's Nikita Gusev, Aho and Necas enjoyed a two-on-none breakaway. They passed the puck three times before Aho scored.

Florida, with a 5-on-3 power play, closed its deficit to 3-2 on Barkov's wrist shot from the high slot with 7:58 left in the third. Yandle had the primary assist.

The Panthers pulled Bobrovsky and drew a penalty to give them a two-man advantage for much of the final two minutes, but they were unable to tie the score.