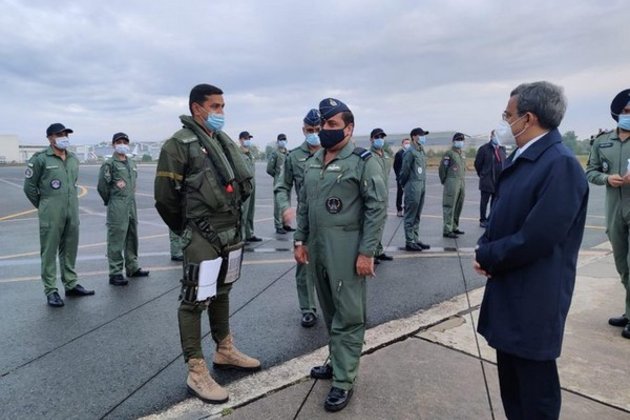 Paris [France], April 22 (ANI): Air Chief Marshal RKS Bhadauria, Chief of the Air Staff on Thursday who is on a five-day visit to France on an invitation from Gen Philippe Lavigne, Chief of Staff visited Rafale Conversion Training Center (CTC), Bordeaux- Merignac and interacted with the IAF contingent at the CTC facility.

"In the latter part of the day, CAS along with Gen Lavigne, Chief of Staff @Armee_de_lair, visited Saint-Dizier Air Base. They were received by the Base Cdr, Col Julien Fourneret who conducted the Chiefs on a tour of the resident fighter sqns and other op and maintenance units," added the tweet.

France is to supply 36 Rafale fighter jets to India as per the contract signed by the two countries in 2016.

The fifth batch of Rafale fighter aircrafts arrived in India on Wednesday flying a distance of 8,000 km from Merignac Air Base in France.The Indian Air force thanked the French and UAE air forces for their refuelling support to complete the journey.

The visit of the Chief of the Air Staff from April 19 to 23 will enhance potential avenues for strengthening the level of interaction between the two Air Forces. He will hold meetings and discussions with the senior military leadership of France and undertake visits to operational facilities and airbases. (ANI)